In 2021, Farming Smarter in partnership with municipalities in Southern Alberta produced a series of articles on soil conservation and methods which can be implemented to stop its spread.  This initiative was in direct response to significant wind soil erosion events which continue to plague southern Alberta's agricultural land which has historically resulted in irreparable loss to productivity and subsequent remediation costs to restore ecological and economic capacity.

Farming Smarter is a farmer-led, registered Canadian charity that focuses on projects to improve the resilience of crop production in Alberta. It serves innovative producers, agronomists and agricultural stakeholders while partnering with like-minded organizations involved in agriculture innovation, applied research and knowledge transfer in production agriculture.

Please consider reading the following five articles, they are an excellent source of information to reduce the effects of soil erosion on your farm and may allow you to prevent the economic effects of soil loss to your agricultural business in the years to come.

It’s not just a heartbreak to see soil blowing east across roads and fields – it’s also an infraction. Soil erosion has negative effects, not just for the landowner losing precious soil, but also for neighbouring lands, roads, ditches, and buildings. In Alberta, the Soil Conservation Act and the Agricultural Service Board Act pair up to provide protection for this soil and help ensure longevity of agriculture in the province. The Soil Conservation Act originated in response to the severe wind erosion the prairies saw in the 1930’s. Alberta passed the Control of Soil Drifting Act in 1935, then replaced it in 1962 by the Soil Conservation Act.

Blowing soil can affect not only your business but all those downwind.

Dollars Blowing in the Wind

There’s more to blowing soil than what (painfully) meets the eye. Those airborne particles can hold vital nutrients and even crop disease. Finer soil particles such as silt, clay , and organic matter tend to be more vulnerable to wind erosion. They are also generally rich in nutrients and essential for healthy, fertile soil. Gurbir Dhillon Ph.D., research scientist with Farming Smarter in Lethbridge, explained that this is one of the biggest issues with wind erosion. What else is blowing away with eroded soil? Money! Dhillon explained that if an inch of soil is lost to wind erosion, approximately 550 pounds of nitrogen per acre will be lost in addition to other major crop nutrients like phosphorus and potassium. Producers must replace them to maintain productivity on their land. The value for these nutrients in terms of equivalent fertilizer costs can be as high as $325 per acre. With several dust storms, the erodible portions of fields can lose this amount of soil in about a decade. This estimate only addresses the loss of macronutrients and doesn’t account for other factors that can reduce profits such as yield decreases, loss of soil structure, less water retention by soils etc.

Where does it blow?

All this macronutrient-rich soil is going somewhere. “Some is deposited on roads and in ditches, where it isn’t productive at all,” said Dhillon. “The deposition of nutrient-rich windblown soils in the drainage ditches or irrigation canals may have other implications such as aquatic weed and algal growth and reduction in water quality.” To make it worse, the soil can also come with problems like weed seeds or diseases. This is a gift the neighbour doesn’t want. 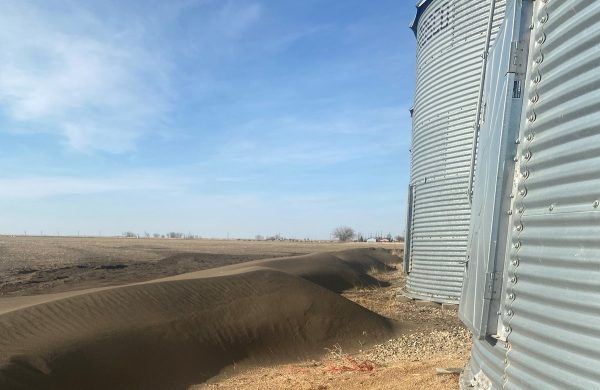 Soil collects wherever the air currents slow down, due to structures or changes in topography.

When the wind picks up and the sky turns grey with blow-dirt, everyone loses. For the farmer whose field seems suddenly half in the air, the economic impact of a major wind event can be nothing short of devastating. “The topsoil is the most productive strip of soil. Losing any amount of topsoil disproportionately impacts productivity, even if there is a decent amount of topsoil,”  explains Gurbir Dhillon, a research scientist at Farming Smarter in Lethbridge.

Unfortunately, we need more research to account for the many field condition variables that make an effective assessment of wind erosion’s actual costs at the farm level, says Dhillon. That said, he says some past studies can provide some guidance, including a study conducted in the 1990s by AAFC soil conservation research scientist Dr. Frank Larney that showed a yield drop of 40% when a two-inch layer of topsoil was stripped from a wheat plot.

Wind also costs nutrient availability. Since some nutrients attach themselves to clay or organic matter, a farmer’s nutrients will hitch a ride out of the field when the soil blows. Too, losing organic matter means a corresponding loss of nutrients that would otherwise have become available through natural decomposition of that organic matter. Taken across all Canadian agriculture, the costs are very significant.

Blow-dirt can also be detrimental to farm fields downwind. Anyone who has found themselves in or next to a field that starts to blow knows that wind filled with particles of sand, clay and organic material is highly abrasive. When a field starts to blow, the abrasive action can decimate a seedling crop next door, and/or can scrape up the surface of a neighbouring field and start it blowing too. At a municipal or regional district level, the costs of blow-dirt can be significant. So far in 2021, the County of Newell, for example, spent nearly $250,000 on its soil conservation program, specifically on contractor fees, labor, trucking, staff time, and gravel to resurface silt-covered roads. “This spring, Mother Nature gave us a whopping spring, so [the County] did bear the majority of the costs of clean-up,” says Todd Green, director of agricultural services with the County. That said, he points out that costs aren’t always so high: the County spent just $908 on soil conservation programming last year, and $0 in both 2018 and 2019.

To better meet taxpayers’ needs into the future, the County is currently creating a soil conservation policy, and updating the Unauthorized Use of Property bylaw regarding who must pay for clean-up. “We’ve talked to many producers who have had [blow events] happen and they all know we can’t sustain the practice of paying for the clean-up. It’s not sustainable long-term for ratepayers who don’t have soil erosion issues to pay for those who do,” says Green.

Tillage is Problematic on the Prairies

No till, cover crops and wind breaks all play a role in mitigating wind soil erosion on the Prairies, but are they equally effective? Allowing soil to blow has negative effects, so it’s important for producers to determine the best practices to ensure they are protecting this resource. David Lobb, Professor in the Department of Soil Science at the University of Manitoba, explained that even small amounts of soil loss can cause big problems. Blowing soil and crop residue can: damage crops; reduce road visibility causing accidents; and cause respiratory problems. Ultimately, even with careful measures to decrease wind erosion, it can’t be eliminated completely. “You should never have the expectation that wind erosion will be completely stopped,” said Lobb. “We always need to produce food, and wind erosion occurs even in natural environments. But, when humans are involved, they need to make sure what they do doesn’t make it dramatically worse.” How do we keep soil where it belongs?

“Use as little tillage as possible,” said Lobb. “It reduces wind, water and tillage erosion problems.” No-till practices have a two-fold benefit when it comes to wind erosion. The plants themselves slow the speed of the wind at the soil surface, substantially decreasing soil loss. Tillage breaks the soil into individual, lighter particles, which are more easily lifted by the wind, so avoiding that practice holds soil in place as well.,Cover crops are used as an alternate source of fixed vegetation.

“If you keep your residue from the previous crop in the ground, the extra residue from the cover crop probably isn’t going to make a significant dent in the wind erosion issues,” explained Lobb. “They can add biomass, but they are not likely to have a huge impact on soil erosion. I would always argue that you shouldn’t till in the first place if you can help it.” Cover crops can, however, be useful following low residue crops like pulses or potatoes. 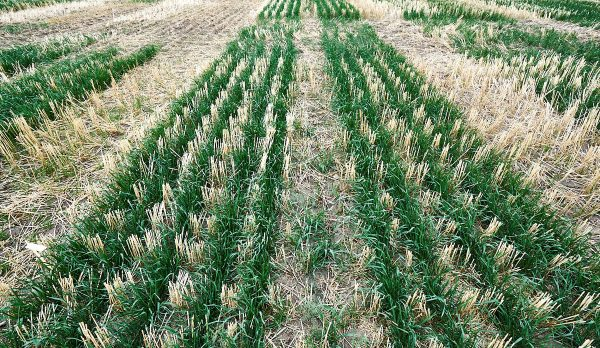 Winter wheat crop growing in the spring of 2021 at Farming Smarter.

Did you read the County Newsletter?

Todays fire rating is None